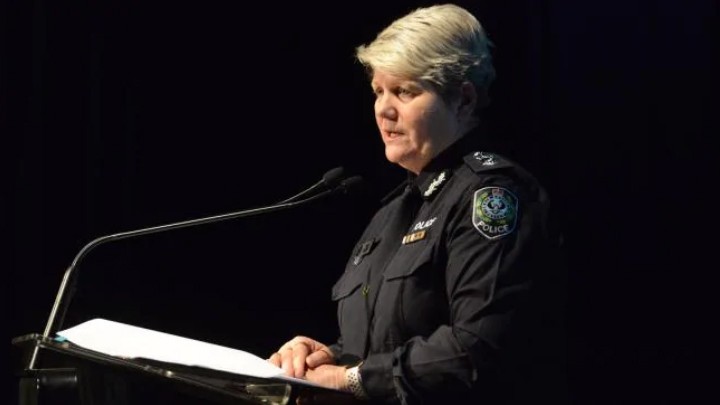 Police have echoed concerns about rock throwing and violence in Adelaide’s south, with one senior officer admitting she looks up “to see if someone is going to throw something at me” as she drives along the Southern Expressway.

MORE than 150 concerned locals packed out Port Noarlunga’s Arts Centre to help find ways to put an end to the escalating violence in Adelaide’s south.

The people - who say they feel like prisoners in their own home and fear using some roads - attended the Police and Community Engagement forum last night, addressing issues including out-of-control parties, youth violence, the state’s ice problem, re-engaging youth and rock throwing on the Southern Expressway.

Among the community’s concerns were underage drinking and youth congregating at parties then spilling on to the streets when they are shut down.

At least two people walked out of the forum, one woman who left saying she had “no faith in the justice system”.

SA Police South Coast LSA officer in charge Superintendent Yvette Clark said at the meeting it was important the community worked together to get the best outcome.

“Most people do the right thing, but there are a handful that don’t,” Supt Clark said.

“SA Police constantly keeps revising its policies and how the are delivered.

“One by one, bit by bit, we will change our community for the better.”

MP Nat Cook, left, with other politicians and police at the meeting. Picture: AAP / Brenton Edwards

She said youth throwing rocks from the Southern Expressway remained a police concern.

“I drive along there and look up to see if someone is going to throw something at me,” Supt Clark said.

“SA Police has been working with the Transport Department and are in the process of reviewing (issues like) the covering of the bridges and addressing rocks sitting at the sides.

“This is not something new and there are some design flaws that need to be addressed.

“It is not going to be fixed overnight.”

The forum came after Port Noarlunga mother Nanette Farrell – whose son was brutally bashed by a gang of youths – called an urgent meeting to curb violence following a spate of incidents in the area.

Local MPs, Ms Farrell, as well as representatives from the Sammy D Foundation, Onkaparinga Council and Aboriginal elders all attended the event.

Neil Davis, from the Sammy D Foundation, said it was time to make a change.

“We are not going to change this overnight,” Mr Davis said.

“We need to educate the kids of today so they can educate their youth as well.

“It is about us working together to come up with answers to our problems.”

Community members at the meeting questioned why Liberal Government representatives did not attend the forum, some saying they were “disappointed” with its decision.

Ms Farrell said the Liberal Government had to join the party to help solve the problem, as well as find ways to educate and dicipline offenders.

“The Education Department showed me tonight that they don’t care,” Ms Farrell said.

“It did not surprise me that Steve Marshall did not turn up because he has shown no interest, right from the word go.”

Police Minister Corey Wingard was unable to attend the meeting due to a commitment with the Special Olympics but told the ABC he sent his “most senior staff member” to represent him.