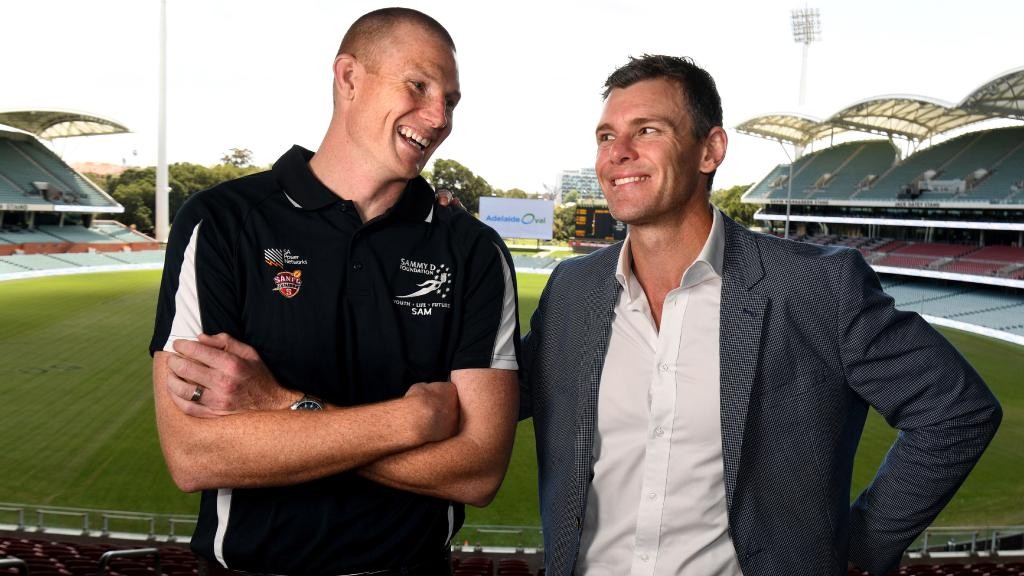 Just days after SBS host Lucy Zelic labelled Adelaide a “sh..hole”, the retired Geelong star talked up his love for the city, revealing he and his family were coming back for a holiday later this year.

“I love being in Adelaide... we’re excited to be coming back here with the family in November,” said Mooney at the Adelaide Oval event.

“My son has made a Victorian under-12s cricket side so we’re having a family vacation here. I thought I’d come over a bit early and scout out the place.”

Canberra-born Lucy has since apologised for her blunt sledge this week, but that didn’t stop Mooney later joking on stage: “Has anyone lived in Canberra? It’s a sh..thole – you can put that in the paper.”

A three-time premiership player with Geelong and North Melbourne, Mooney was one of the guest speakers at the luncheon, which was hosted by Seven’s Mark Soderstrom and is now a Grand Final week tradition in Adelaide.

Joining Mooney at the event was former Crows ruckman Sam Jacobs, while The Advertiser columnists Graham and Kane Cornes, Warren Tredrea and Mark Bickley were part of a panel dissecting Saturday’s big clash between Richmond and Greater Western Sydney.

Jacobs, who recently announced he was leaving the Crows, told the sold-out crowd it was a “very tough” decision for him to make.

“It hasn’t sunk in to be honest. I love the club and it’s sad to move on,” said Jacobs, who’s tipped to join GWS next season.

“I’ve had so many kind messages from supporters... it’s been overwhelming and humbling.”

Mooney described what it was like to win an AFL flag, a feat which he achieved in 1999 with the Kangaroos and in 2007 and 2009 with the Cats.

“Apart from family and children, it’s the greatest moment of your life. I was lucky enough to do a few times with Geelong and the Kangaroos and whoever wins it this weekend, they’ll never forget it,” he said.

It’s been a difficult few weeks for Mooney, following the recent death of AFL legend Danny ‘Spud’ Frawley, who was a close friend and colleague on popular Fox Footy show, The Bounce.

“It was by far the toughest week of my life. I got to work with Spud for the last four or five years on a weekly basis... there are people who have known him a lot longer than I have, particularly his family,” he said.

“The funeral was brilliant, you couldn’t have asked for a better funeral. It was fun, which I think is the best way to explain it and that’s the best he should be remembered.”

Funds raised from the luncheon will go towards the Sammy D Foundation and the Channel 7 Children’s Research Foundation.

To view the original article on The Advertiser, click here.